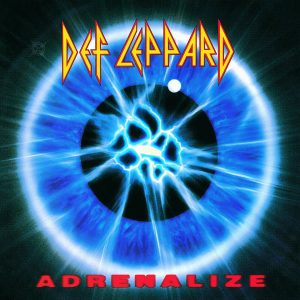 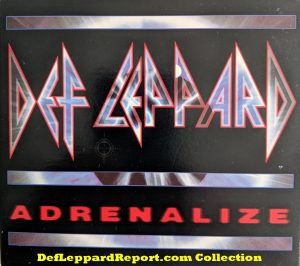 It had been 5 long years since Def Leppard’s previous album Hysteria was released, an album which brought the band immense commercial success, a world tour that lasted years, and when all was said and done, a lingering question: What’s next?

What kind of album would the band make to follow up Hysteria — one of the biggest selling rock albums in history — which itself had outsold their previous sales juggernaut Pyromania?

Add to the equation that Mutt Lange wasn’t going to produce album #5, and the pressure (admittedly, self-imposed by the band) for Hysteria‘s follow-up was all but certain to mount.

Incidentally, Mutt Lange’s parting advice to the band was to NOT try and record an album similar to Hysteria as their follow up.

Here’s how Rick Savage explained it in an interview with Classic Rock:

“It was obvious Mutt wasn’t going to be a hands-on producer, like he’d been on the previous three albums. He said, ‘You know what you should do – you should forget about doing a ‘Hysteria’-type album and make a Guns N’ Roses-type album.’ We didn’t know how to take that.”

No Promises, No Guarantees…

Any questions about what type of album Def Leppard would create for their fifth album suddenly seemed so unimportant when the band had to cope with yet another tragedy: the death of Steve Clark.

It was such a unique time for the band, filled with uncertainties: Def Leppard without riff master Steve Clark — is that possible? Can the band survive this latest tragedy?

It’s Def Leppard — of course, they can.

The band ultimately overcame the momentous setback and persevered once again: Def Leppard’s Adrenalize ended up being yet another #1 record worldwide for the band, selling millions of records.

No matter what type of album the band released, hardcore fans were longing for Def Leppard’s return and were ready to welcome them back with open arms.

As for radio stations, well, they weren’t quite so sure what to expect and might have needed more convincing — especially as the music industry’s attention had turned to grunge, so extra efforts were put into “reintroducing” the band…and answering some inevitable questions.

As a result, a special interview CD was created by the band’s record company and mailed out to radio stations. It not only helped promote Def Leppard’s Adrenalize release but also address questions surrounding the status of the band.

The interview disc featured a booklet with a list of questions; the CD itself simply included Joe Elliott’s answers (track by track) to the questions printed in the booklet.

Obviously, we all know how things ended up, but it’s still interesting to hear Joe’s responses in hindsight, especially to question #12: “Will there be a fifth member of Def Leppard?”

Here’s an excerpt from Joe’s answer:

“Yes, there will be a fifth Leppard. We don’t know who it is…We just gotta make sure we get the right guy. We’ve got a few people in mind…The most important thing is they’re British and that they’re a very nice guy.”

Clearly, everything worked out in the end with the addition of Vivian Campbell.

“I Wanna Touch U” Tidbit

On a side note, here’s an interesting fact about the song “I Wanna Touch U” that Joe also talked about on the promotional interview CD:

Rick Allen originally came up with the idea for “I Wanna Touch U,” but the song’s verse was actually based around a chorus Joe had already written for a completely different song tentatively titled “High Over You” — which was later changed to “High On You” — which ultimately became the first line in the verse for “I Wanna Touch U.” (“I get high on you…!”)

In At The Deep End, Hang On Tight…

Looking back, Adrenalize featured some great, memorable tracks — “Let’s Get Rocked” is still a concert favorite; “Have You Ever Needed Someone So Bad” remains one the band’s biggest power ballads; other beloved gems like “Stand Up (Kick Love Into Motion)” and the album’s epic “White Lightning” remain evergreen.

Def Leppard’s Adrenalize remains the only album the band recorded as a four-piece (as seen in the band’s “Let’s Get Rocked” music video, too).

Understandably, being such a unique recording period, the band still has mixed feelings about Adrenalize, even to this day.

Rick Savage had this somber reflection about the album: “We tried to outdo Hysteria, which was a mistake…It really doesn’t cut it for me.”

Joe Elliott has stated his opinion of the album changes constantly. Here’s Joe talking about it, and what he thinks is Adrenalize‘s stand-out track:

You can read Def Leppard Report’s complete ranking for all of Adrenalize‘s songs here.

Inevitably, Def Leppard was a changed band with Adrenalize‘s release. But they overcame and persevered, and continue to entertain audiences around the world.

Joe Elliott is known to say at the end of each Def Leppard concert, “Don’t forget us, we won’t forget you” — that phrase seems all the more fitting when thinking back about the Adrenalize era.

Looking back, we can all agree they definitely weren’t forgotten, and it felt good to have them back.