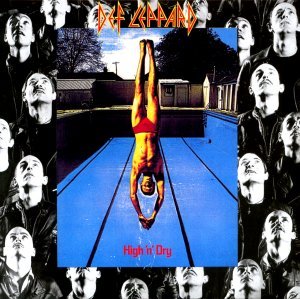 It’s easy for some to overlook the significance of Def Leppard’s second studio album, especially with the band’s incredibly successful follow-ups Pyromania and Hysteria overshadowing it. And yet, there is a sizable group of Def Leppard fans who consider the High ‘n’ Dry album to not only be the band’s best release, but the band at its best — song-wise, attitude-wise, and, yes, even line-up wise. 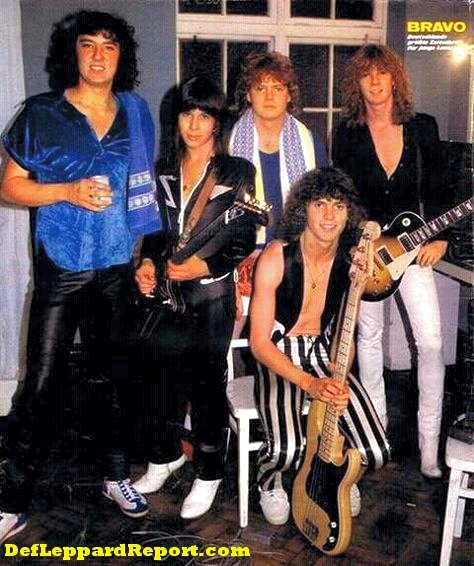 Regardless of the Def Leppard era you prefer, High ‘n’ Dry is arguably the band’s most important album.

If debut album On Through The Night planted the proverbial seeds of the band’s impressive, budding talents, High ‘n’ Dry saw those seeds break ground and begin to bloom, showcasing what Def Leppard was capable of while taking their musical abilities to a whole other level.

High ‘n’ Dry exhibited a more finely crafted version of the band compared to On Through The Night.

Whereas On Through The Night introduced Def Leppard’s capacity to rock hard, High ‘n’ Dry confirmed it wasn’t a fluke and accomplished the feat on a much grander scale: bigger production, bigger sound, more ambition, more energy, and a lot more confidence.

Def Leppard’s High ‘n’ Dry charted a course for the band that would reward them with spectacular success(es) for years — actually, decades — to come. Uncoincidentally, it was also the first time the band collaborated with record producer extraordinaire Robert John “Mutt” Lange. (Read an in-depth look at Mutt Lange’s body of work here.)

Mutt Lange brought out the best in the band as only he could: Joe Elliott’s thick vocals were unquestionably more powerful than ever before, guitar parts were tighter, and the bass and drums were way more prominent in keeping the tempo.

The album’s overall production sustained a hard edge throughout, and while slicker than On Through The Night, it still sounded much less polished and multi-layered compared to the band’s future albums.

And it worked out beautifully.

High ‘n’ Dry engulfed listeners with its brand of hard rock mixed with just the right amount of melody to hook listeners.

The album showcased Def Leppard’s guitar sound in songs unlike any of the band’s other albums, courtesy of the masterful dual assault from Steve Clark and Pete Willis.

Revisit the High ‘n’ Dry album and pay extra attention to the guitar parts throughout all the songs — not just the guitar solos (or “Switch 625”); listen to how the guitars actually complement and interact with Joe Elliott’s vocals; they are so prevalent and practically have a voice of their own.

Mutt Lange’s influence and involvement definitely played a part in the accomplishment, but the majority of the credit goes to Steve Clark and Pete Willis, two of High ‘n’ Dry‘s most essential contributors.

High ‘n’ Dry Is Not About The “Singles”

Even though High ‘n’ Dry left an indelible mark, the album surprisingly does not contain a bunch of chart-topping singles.

It did have some radio support: “Let It Go” (originally titled “When The Rain Falls”) did get some radio play and ended up charting, peaking at #34 on Billboard‘s less popular Mainstream Rock Chart. 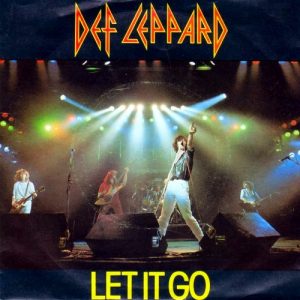 And, of course, “Bringin’ On the Heartbreak” (originally titled “A Certain Heartache”) was also a single… 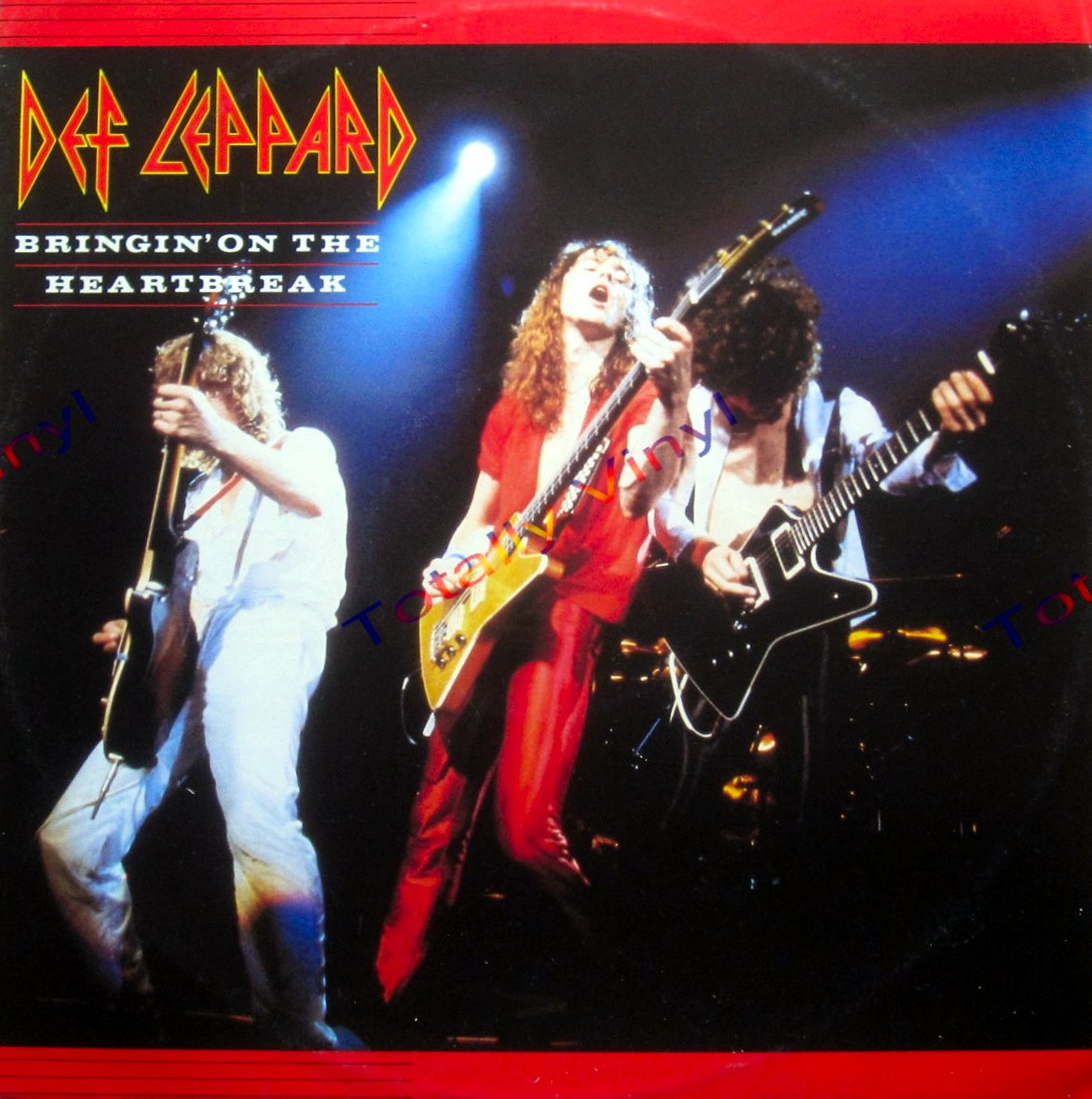 …but it didn’t do much chart-wise until it was re-released.

The first time “Bringin’ On the Heartbreak” was released as a single, its music video featured a straight-up concert performance by the band. 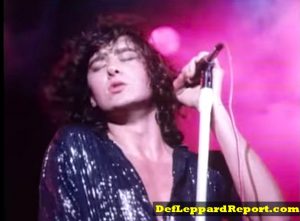 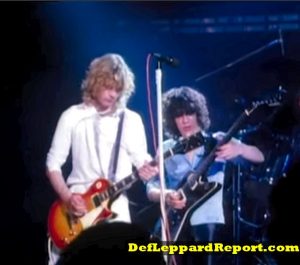 But it wasn’t until 3 years later, due to the success of Pyromania, that “Bringin’ On the Heartbreak” was remixed, revived, and re-released (along with B-side “Me and My Wine”).

Timing-wise, it worked out splendidly to the band’s advantage, mostly due to the support of up and coming cable channel MTV.

Not only did the second version of the “Bringin’ On the Heartbreak” music video feature what some might consider an entertaining, albeit overly dramatic storyline, it also provided the band with the opportunity to feature Pete Willis’ replacement, Phil Collen. (Coincidentally, Pete Willis was fired from Def Leppard exactly one year to the day after the High ‘n’ Dry release.)

In the updated “Bringin’ On the Heartbreak” video, Joe Elliott still had his rockstar look down pat, this time with straighter hair though… 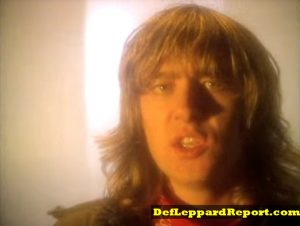 …and Steve Clark still looked as cool as ever: 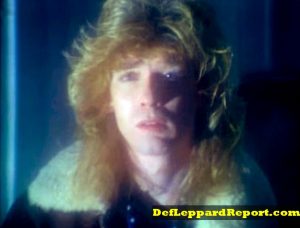 In the end, the “Bringin’ On the Heartbreak” re-release peaked at #61 on Billboard‘s Hot 100 Singles chart. 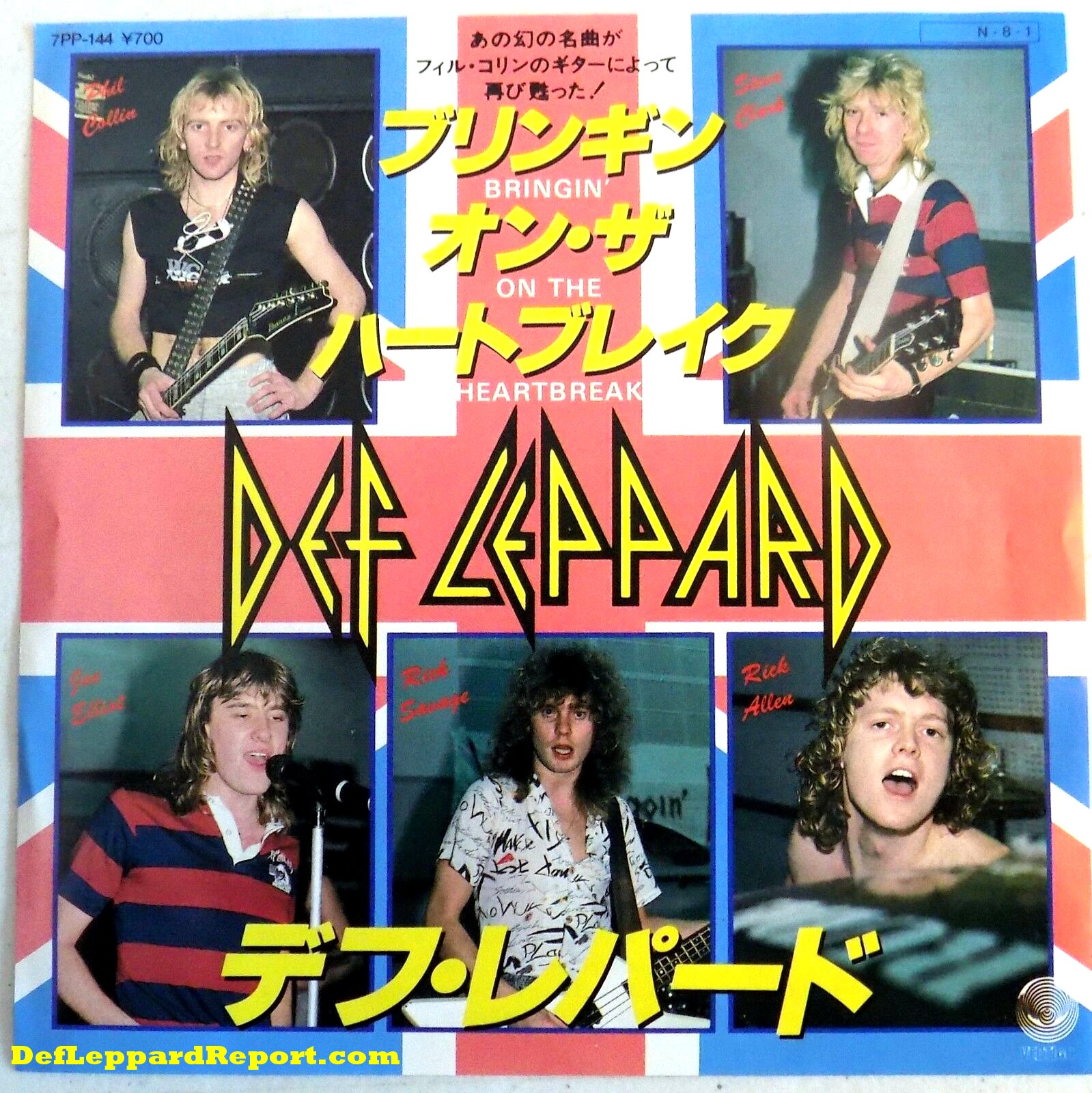 But it wouldn’t be until Pyromania when the band discovered the true meaning of commercial success.

High ‘n’ Dry remains the go-to album for many Def Leppard fans. Some still long for those days, wishing the band would revisit the hard-edged, raw sound which made the album an unforgettable favorite.

But is Def Leppard even capable of making another album similar to High ‘n’ Dry?

There have been sporadic moments over the years since its release, where a “newer” Def Leppard song has arguably encapsulated a High ‘n’ Dry vibe. (“Four Letter Word,” “Forever Young,” “Broke ‘N’ Brokenhearted” are just a few examples.)

But, realistically, could Def Leppard create another High ‘n’ Dry-type album ever again?

First, it doesn’t seem to be the type of music the band is interested in making at this stage in their career, and without Mutt Lange’s repeat involvement, it becomes all the more out of reach.

Secondly, there is one very important reason why it simply cannot be done: the band no longer includes the two band members who were essential in creating High ‘n’ Dry: Steve Clark and Pete Willis.

Aside from all the brilliant guitar licks, riffs, and solos each contributed throughout, Steve and Pete also co-wrote NEARLY EVERY SONG on High ‘n’ Dry. (Interestingly, two other song gems from the High ‘n’ Dry recording sessions left unfinished and saved for Pyromania were “Rock! Rock! (Till You Drop)” and “Photograph.”)

Here is a breakdown of the High ‘n’ Dry album’s tracklisting — along with who wrote each song (bold emphasis added to further make the point):

Revisiting the magic created during the band’s earlier era isn’t possible without the input and immense contributions of original members Steve Clark and Pete Willis.

But that’s okay. Best to savor the album for what it is…and was, and leave it at that.

Click here to read a detailed breakdown and ranking of all of High ‘n’ Dry’s songs.

The band still includes songs from High ‘n’ Dry when touring, yet some more than others.

“Bringin’ On the Heartbreak” is usually a given, and over the years songs like “Let It Go,” “Another Hit and Run,” and “High ‘n’ Dry (Saturday Night)” have made it onto their setlist.

Even “Switch 625” has remained a staple in recent years, though performing Steve Clark‘s epic without Steve himself just isn’t the same.

Many fans consider “Bringin’ On the Heartbreak” High ‘n’ Dry‘s one and only standout track — it’s also the only song from the album that made it onto the band’s first greatest hits release, Vault — but that would be doing the album a disservice, as there’s so much more to it.

Ultimately, it peaked at #38 on Billboard‘s Top 200 Albums chart and ended up reaching double platinum — a far cry from the albums that followed it. Yet make no mistake, it paved the way.

High ‘n’ Dry is also structurally unique in how it differs from the likes of Hysteria and Pyromania. You can easily choose 3 songs off of Hysteria (let’s say “Pour Some Sugar on Me,” “Animal,” and “Hysteria“) or Pyromania (“Photograph,” “Rock of Ages,” and “Foolin'”) to sum up or best represent those albums.

Even though all of High ‘n’ Dry‘s songs can solidly stand on their own, the best way to truly appreciate their intensity is to listen to the entire album all the way through —  that’s how well they flow into each other. Choosing only a handful of select songs (or singles) would sell the album’s experience short.

An Impressive Hit (And Run)

Commercial success or not, High ‘n’ Dry opened up the band’s eyes to what they were capable of and laid the groundwork for them to build on going forward.

It also marked the beginning of a career-changing collaboration: working with Mutt Lange.

Without High ‘n’ Dry and the chance to work with Mutt, it’s possible that there never would have been a Pyromania or Hysteria…or at least the type of albums they ended up becoming.

But that’s how significant and vital High ‘n’ Dry was in directing Def Leppard’s career path.

Not only is it a classic, it’s in a class by itself; it’s the transformative album that was pivotal in defining what Def Leppard was as a band, and what more the group could (and would) ultimately become.

A Rockline interview from 1981 comes to mind, where a young Joe Elliott humbly explains what the band tried to achieve with the High ‘n’ Dry album:

“We’re just trying to get energy across really, that’s all. We just like playing rock ‘n’ roll. That’s the music we’ve grown up on, that’s the music we’ll always play. And we’re just an energetic band live, and we try to get it across on record…”

That statement perfectly sums up what the band accomplished with the ever-powerful High ‘n’ Dry, and it’s never been truer than on any other Def Leppard album. 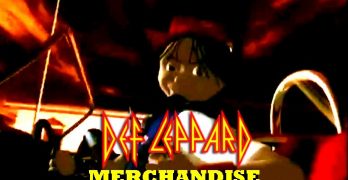 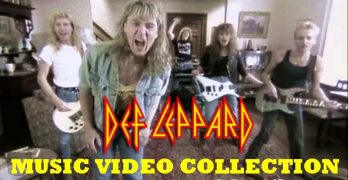