Def Leppard’s song “Hysteria” may very well be a “magical mysteria,” especially in how it packs a wallop as powerful as any of the Hysteria album‘s more bombastic tracks.

It’s not a power ballad, and it would be a bit of a stretch to classify it as a ballad per se, at least a typical one. Referring to it as a mid-tempo pop-rock song might be more appropriate.

The elusiveness to label “Hysteria” only adds to its mystique, a song that is delicate and subtle in its approach, yet grasps listeners and puts them under its mighty spell right from the outset. 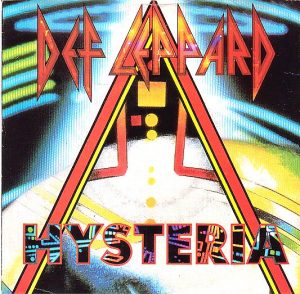 The song’s positioning on Hysteria‘s tracklisting is quite fitting, too. Once you get beyond opening track “Women,” the first half of the album overflows with a slew of massive, radio-friendly hit singles, while the second half (aka “Side 2”) contains the album’s supposed “deeper” cuts. Yet in the middle of them all, “Hysteria” makes its appearance. It’s a bit unexpected, and almost sneaks up on the listener, but still doesn’t feel out of place sandwiched between “Run Riot” and “Excitable.” It holds its own, never to be underestimated, and stands out from the pack.

It’s also worth mentioning the band did a splendid job capturing the song visually in its classy music video. From its dancehall setting to its dimly lit mood lighting, not to mention the band’s choice of wardrobe, the video successfully embodies and reinforces the sheer elegance of the track. (There have been times when a Def Leppard music video works against a song — “Tonight” being one of them — but this is definitely not one of those occasions!) 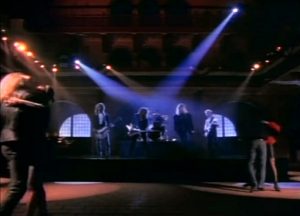 When You Get That Feelin’, Better Start…Recording It!

“Hysteria” is one of Def Leppard’s best examples of song synchronicity.

As you may have read in previous articles, the band is known to sometimes piece together completely different ideas brought forward by band members, which then results in the creation of an unexpected new song.

Phil Collen explained how “Hysteria” came about to Goldmine Magazine:

“We pieced together that song. I remember we were sitting in Dublin, and Rick Savage goes, “Oh, I’ve got this riff.” He played it, and I literally just sung the first verse. It was the first thing that came out of my head and I was like, “Write this down; record it.” We did the next bit. It literally happened so quickly that we had half of the song. We took it to Steve, Mutt and Joe, and it turned out to be something else.”

Here’s Rick Savage further describing (and demonstrating) the origins of “Hysteria” on the Classic Albums release:

MUST READ  Def Leppard: Songs From The Sparkle Lounge (Album Anniversary): A Look Back

In between all of its nuances, “Hysteria” effectively showcases the band member’s talents throughout its infectious melodies: Joe Elliott’s rich, powerful vocals; finely textured guitars layered on by Steve Clark and Phil Collen; Rick Savage’s steady bass bridging the gaps all throughout the song, along with the hypnotic groove of Rick Allen’s drums.

Producer Robert John “Mutt” Lange and engineer Mike Shipley (who handled the mixing) also deserve major accolades in making “Hysteria” a reality. Without their creative input and technical wizardry, the song would not have been the gem it turned out to be.

“Hysteria” was the third single off of the Hysteria album in the U.S. (following up “Women” and “Animal”), and continued the streak of each single outperforming its predecessor on the charts.

“Hysteria” became the album’s first top 10 single, peaking at #10. (The upward chart momentum continued as “Pour Some Sugar on Me” followed it up, reaching #2; “Love Bites” came next, reaching #1 on Billboard’s Top 100 Singles Chart.)

Might the single chart performance of “Hysteria” been even higher if it were released after a juggernaut like “Pour Some Sugar on Me,” which resulted in the album’s sales, radio support, and overall awareness to skyrocket? Maybe, maybe not. But in the end, it doesn’t matter — a #1 single does not always a great song make, and “Hysteria” soared regardless.

Still Hysterical After All These Years

“Hysteria” is a mainstay on Def Leppard’s setlist; it would be sacrilegious to not include it in concert (though, in all honesty, the same can be said about numerous other songs in the band’s catalog, which is a whole other discussion).

“Hysteria” is still well-received and as popular as ever to live audiences. The band’s live performance of the song is more straightforward these days, as opposed to the Hysteria tour when they would tease the crowd with a more ambiguous introduction, leaving audiences guessing (while also providing Joe Elliott with a quick break). It wouldn’t be until the song’s classic melody kicked in that its identity was finally revealed.

MUST READ  Def Leppard: Pyromania (Album Anniversary): A Look Back

Here’s a prime example of this unique introduction, from the band’s fantastic In The Round, In Your Face live release:

Prior to making their catalog available digitally, and due to what seemed like a neverending digital royalty dispute with their record company, Def Leppard re-recorded (nearly) identical versions of several tracks in their repertoire and put them out themselves.

It’s no surprise the band chose to re-record “Hysteria” back in 2013. And while the term “imitated, but never duplicated” might apply, Def Leppard’s respectable effort still couldn’t replicate the inimitable magic of the original.

Fortunately, it’s now a moot point, as the band’s entire catalog was finally released digitally in 2018, allowing a whole new generation to discover and enjoy the songs as they were originally intended.

In case you weren’t aware, “Hysteria” has also been covered by other artists — from indie rock band Lovedrug, with their acoustic take of the song…

It’s worth noting that Matt Nathanson is a huge fan of the band and actually recorded an EP solely of Def Leppard covers in 2018 titled Pyromattia. You can read more about the digital release and check out samples of the EP’s other tracks here.)

It also ranks #1 in the Def Leppard Report’s song ranking of the Hysteria album. Here’s a snippet:

“Certain Def Leppard songs can transport you to a different time the very moment you hear their opening notes — “Hysteria” unfailingly achieves this remarkable feat.”

As for what the song’s meaning and ultimate message is, Phil Collen described it this way in an interview with Songfacts:

“The song really is about finding spiritual enlightenment. Not many people know that because it sounds like just getting hysterical, but it’s actually about that. It’s about finding this deeper thing, whether you believe it or not.”

Fans most certainly believe it. Still do to this day.