Def Leppard’s “Let’s Get Rocked” was unleashed to radio stations in April 1992.

The song was the first single off of the band’s 1992 Adrenalize album.

“Let’s Get Rocked” is also included in all of the band’s greatest hits compilations — Vault, Rock of Ages: The Definitive Collection, and The Story So Far.

From the very moment Joe Elliott asks listeners “Do you wanna get rocked?” you know you’re in store for 4 minutes and 56 seconds of frenetic, anthemic rock music loaded with Def Leppard’s trademarks: a very polished production, a wall of sound featuring bombastic drums, thunderous guitars, unmistakable power chords and massive hooks, all of which effectively lead into an infectious bridge and shout-out-loud chorus.

There’s no doubt “Let’s Get Rocked” and its carefree take on life was also cathartic for the band (and fans) back in 1992, still grieving from the tragic death of guitarist Steve Clark.

Instead of going down a darker path as some might have expected, the band decidedly took a more lighthearted, feel-good approach with Adrenalize (sans “White Lightning”), attempting to recapture the sonic escapism days of Hysteria, and “Let’s Get Rocked” is a prime example.

The song’s intended silliness didn’t connect with everyone, though.

Over the years, Joe Elliott has spoken out about how the song’s tongue-in-cheek lyrics and humor went over the head of many music critics who were quick to dismiss “Let’s Get Rocked” and not give it a fair chance.

Joe discussed “Let’s Get Rocked” in an interview with Kaos 2000:

“I have a line in the song, ‘I suppose a rock’s out of the question.’ They [music critics] missed the point that it’s supposed to be funny. I’ve said in the past, of that song, actually listen to that song. Strip all of your negative things away and listen to it and tell me that Prince couldn’t have done that. I would say, ‘You’re lying’ to anyone who says he couldn’t have. It wasn’t a rip-off of Prince, but I don’t see it a million miles from ‘When Doves Cry’ or ‘Little Red Corvette.’

“It’s a basic, structured-down me singing over drums and bass. It’s just that our drums and bass were a million times bigger than Prince’s. It was way more bombastic. I think that is the shield that most journalists can’t get through. They just see this over-produced, big, massive sound. In fact, that was exactly what we were trying to achieve.”

Not My Style, Man!

Bart Simpson from The Simpsons TV series was the inspiration for “Let’s Get Rocked” —  the song’s opening verse sets the tone early on with the lyric “I’m your average, ordinary everyday kid. Happy to do nothin’…” (Decades later, Homer Simpson joined forces with Family Guy‘s Peter Griffin to perform their own, um, special Def Leppard tribute. Watch it here.)

The song’s intentionally juvenile premise was further played up in Def Leppard’s nothing-but-a-good-time “Let’s Get Rocked” music video, where audiences were introduced to an animated character named Flynn. 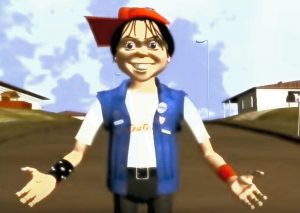 The band even included the Flynn character on their Adrenalize tour backstage passes — here’s one from the personal collection: 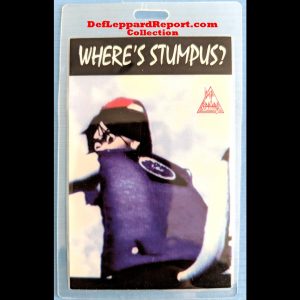 Even though Flynn ended up being more a flash in the ’90s pan, never to be seen again, fans still remember the character and what it represented, summed up nicely in the lyrics “Let’s get out and play, rock the night away…”

I Suppose A Top 10 Hit’s Out Of The Question?

“Let’s Get Rocked” was a major turning point in Def Leppard’s career in more ways than one.

The song was written by Joe Elliott, Phil Collen, Rick Savage, and Mutt Lange — the writing team behind all of Hysteria‘s songs…sadly, with the one very notable exception: Steve Clark. “Let’s Get Rocked” kicked off a new Steve Clark-less era for the band.

The release also signaled how the times were (quickly) changing in regards to Def Leppard’s chart dominance.

The song landed on Billboard‘s Top 100 Singles chart at #27 — an exceptionally strong, unprecedented, first-week debut for the band. (A combination of pent-up interest and demand from fans who had waited years for new music from the band, extremely strong CD and cassette single sales, and initial radio airplay support all contributed to the amazing feat.)

But long-lasting chart momentum, a stalwart of the Hysteria years, had changed drastically.

Normally, a single debuting at #27 would provide the song with enough momentum to ultimately catapult it to the top of — if not, near the top of — the Hot 100 Singles charts by the end of its run.

After its powerful debut, though, “Let’s Get Rocked” went from #27 to…#27 in its second week of release, not moving up at all.

It practically stalled in its third week as well, moving up only one slot to #26, before continuing its upward climb 8 spots in its fourth week to reach #18.

It slowly crept up 3 more slots to #15 in Week 5, which is where it would peak — disappointing, and a bit shocking, that after such an amazingly strong debut, “Let’s Get Rocked” couldn’t even reach the Top 10.

It soon became clear the days of Def Leppard singles enjoying a sustainable chart life were numbered (no pun intended).

This should have been a warning sign, one that should have triggered a recalibration of Adrenalize‘s single release strategy. Unfortunately, going with rocker “Make Love Like A Man” as the album’s second single was a misfire; the track peaked at #36 on Billboard‘s Hot 100 after only FOUR weeks on the charts, further putting a damper on the album’s overall momentum. (Read more about the “Make Love Like A Man” single release here.)

It was the ’90s, and the ever-present grunge movement made the change in musical tastes blatantly evident, but only when looking back is it crystal clear that the days of a Def Leppard single meaningfully climbing up the charts would be far and few from that point forward.

No matter the chart performance, it’s practically a given that “Let’s Get Rocked” will still be part of a Def Leppard concert setlist, as it remains a crowd favorite.

By the way, did you ever notice the band usually replaces the song’s lyric “Walk the dog!” with “Shag the dog!” when they perform it live? Here is just one of many instances:

The Def Leppard Report ranks “Let’s Get Rocked” the #1 track off the Adrenalize album.

Accepting the song for what it is — a fun, catchy rockin’ tune, which showcases Def Leppard’s technical wizardry in the process — makes it all the more enjoyable.

It’s not surprising that it remains one of the band’s most popular songs. Even decades after its release, many of the band’s fans most certainly still wanna get rocked.