The track is also included on Def Leppard’s Vault (vinyl edition) and The Story So Far… greatest hits releases.

A Def Leppard song with tongue-in-cheek lyrics isn’t anything new. Take a glance through the band’s catalog and you’ll quickly find a handful of examples.

There are also instances when the band’s songwriting can be quite subtle in conveying a message.

“Make Love Like A Man” is not one of those times.

It’s very straightforward in its delivery and humor — for better or worse — and is a prime example of the lighthearted direction the band pursued for their Adrenalize album. (After all, the album’s lead-off single “Let’s Get Rocked” was inspired by “The Simpsons.”)

Whereas Hysteria offered up songs like “Women” and “Pour Some Sugar On Me,” Def Leppard took their adoration of the female persuasion to a bolder level lyrics-wise with Adrenalize tracks like “Personal Property,” “I Wanna Touch U” (“…till we’re stuck like glue!”), and, of course, “Make Love Like A Man.”

Some may view the “Make Love Like A Man” lyrics as blunt and crass, but that’s how they were intended to be: co-writer Phil Collen, who brought the song’s original concept to the band has stated the original “make love like a man” lyrics were only used as humorous filler until better ones could be crafted during the song’s recording stage.

Not only did Joe Elliott and Mutt Lange find Phil’s original lyrics amusing, they preferred to keep them as-is. (This should come as no surprise, especially for Mutt Lange, who’s had his share of unconventional songs; soon after, he would co-write the Bryan Adams songs “(I Wanna Be) Your Underwear” and “The Only Thing That Looks Good on Me Is You.”)

There’s no point in attempting to dissect the lyrics to “Make Love Like A Man.”

They’re basic and simplistic, though lines like “I’m a man, that’s what I am.” makes one wonder if the band could have come up with something a tad wittier.

But that’s neither here nor there.

“Make Love Like A Man” is a playful song.

It’s been included in many Def Leppard tour setlists over the years and takes on a whole new level of energy when its sing-along chorus is performed live.

It also allows Joe Elliott to showcase his vocal chops by stretching out the word “Better-r-r-r-r-r-r…” at the song’s end, holding the note to the concert audience’s delight and approval. Here’s just one example, cued up to that very moment: 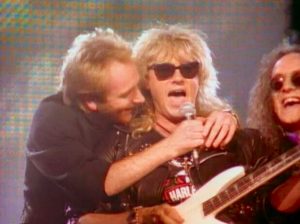 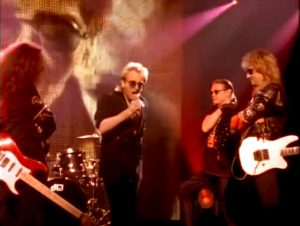 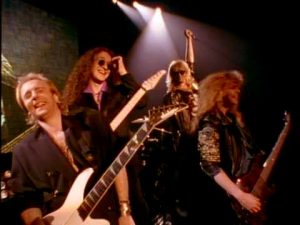 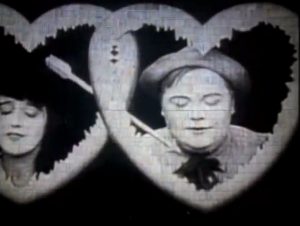 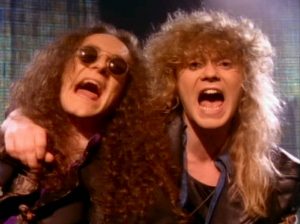 You can revisit the “Make Love Like A Man” music video (along with every other official music video from the band) here.

In hindsight, releasing “Make Love Like A Man” as the second single off Adrenalize was a strategic misfire.

MUST READ  Def Leppard Self-Titled Album Anniversary: A Look Back

It was rather obvious by the time of Adrenalize‘s release that the days of multiple Def Leppard single releases nearly topping and lingering on music charts for long stretches of time (aka the days of Hysteria) were just about gone.

Nirvana’s “Smells Like Teen Spirit” already had its pop culture moment, and the band’s Nevermind album had ruled the Billboard charts only months prior to the Adrenalize release.

Change was in the air, to put it mildly. All the more reason, single selection for Adrenalize was of the utmost importance.

Things started off beautifully with “Let’s Get Rocked” as the album’s first single. Yes, it was silly in its own right, and some hardcore fans might have felt a bit of a disconnect to the “edgier” Def Leppard they so fondly remembered from the Hysteria and Pyromania days, but the song did its job.

“Let’s Get Rocked” exploded onto Billboard‘s Hot 100 singles chart. It debuted at #27 — an unprecedented debut chart position for a Def Leppard single, but not entirely surprising given the band’s long-awaited return, strong single sales, and initial radio station support.

But “Let’s Get Rocked” quickly started to lose momentum; in its second week, it stalled and remained at #27.

Normally, a song debuting at number #27 on Billboard’s Hot 100 Singles Chart would be a safe bet to rocket up the Top 10 and have a fighting chance at even topping the chart at some point.

“Let’s Get Rocked” peaked at #15 — a respectful accomplishment in and of itself, but when looking at the bigger picture, it was an early sign that the band’s history of chart success was beginning to waver.

Not only did “Let’s Get Rocked” — arguably the most radio-friendly rock track on the Adrenalize album — not even reach the Top 10, it peaked only 6 weeks into its run before declining back down the chart.

To put things into perspective, “Pour Some Sugar on Me” took 14 weeks to peak; even “Armageddon It” (single number SIX off Hysteria) lasted 10 weeks before it ran out of chart fuel.

“Let’s Get Rocked” should have made a longer-lasting impact on the charts.

The music industry mood was changing quickly, so it was vital to keep radio airplay momentum going.

Selecting the album’s second single was imperative — not only to help maintain (if not grow) Adrenalize‘s sales but overall interest in the album itself.

The fact that “Let’s Get Rocked” had a chart life drastically shorter than previous Def Leppard singles was a warning sign.

Time was of the essence.

It was already a pretty safe bet that Adrenalize wasn’t going to have the same type of longevity as Hysteria, so striking while the iron was still hot (though quickly cooling) was all the more crucial.

And for that reason, “Make Love Like A Man” should NOT have been Adrenalize‘s second single.

“Let’s Get Rocked” already showcased the “sillier” lyrical side of Def Leppard; following it up with an even sillier, over-the-top song wasn’t helpful either.

What should have been the second single?

“I Wanna Touch U” and “Heaven Is” were other radio-ready tracks, though a little too overly produced and not as potent as “Let’s Get Rocked.” (Even though “Heaven Is” was never released as a single in the U.S., it was released in the U.K. and reached the Top 15 on the charts.)

Ultimately, “Tear It Down” would have been a wiser choice.

It’s unfortunate the Adrenalize version of “Tear It Down” watered down the song’s original rawer, edgy sound (the original version was the B-side on Hysteria‘s “Women” single). Nevertheless, the track as a single would have effectively showcased Def Leppard’s mastery of still rocking hard and reminded many of the vintage riffs and hooks they’d come to love over the years.

It would have also satisfied “old-school” fans by giving them the opportunity to reconnect with the band’s music, as well as newer ones just discovering Def Leppard for the first time.

And finally, it would have delighted ROCK radio stations who no doubt would have supported the track, and, thus, the album.

The “Make Love Like A Man” single peaked at #36 (after only FOUR very short weeks of climbing the Hot 100 Singles chart) and very quickly disappeared, taking the air out of Adrenalize‘s sails (and sales) in the process.

This is not to dismiss the fact that Adrenalize achieved great early sales success. Not long after its release, the album was immediately certified triple platinum in the U.S. alone. Very impressive, but it’s also where its sales certification remains to this day; it never increased after that initial phase. Hence, the importance of keeping the early sales momentum going.

A good parallel to “Make Love Like A Man” is the Hysteria track “Excitable” — it’s fun, catchy, and rather straightforward (lyrically and musically). With that said, “Excitable” was once considered to be the EIGHTH single off the Hysteria album, but ultimately wasn’t released.

But it still makes for a solid album track.

“Make Love Like A Man” would have been just fine following the same album track path.

Decades after its release, “Make Love Like A Man” still goes over well when Def Leppard performs it live.

Its days of consistent inclusion on the band’s tour setlist are likely over though, as even Joe Elliott has gone on the record saying he prefers to not perform it live, referring to the lyrics these days as a “nod too stupid.”

Ironically, the band’s self-titled Def Leppard album includes the track “Man Enough,” a song whose main lyric is “Are you man enough to be my girl…”

The Def Leppard Report ranks “Make Love Like A Man” the #7 track off the Adrenalize album. As for whether releasing it as a single was the wrong decision no longer matters. It’s just nice to know that decades after its release — misfire or not — Def Leppard still enjoys an immense amount of popularity and is a well-deserving member of the Rock & Roll Hall of Fame.

Time will tell whether the band further shies away from “Make Love Like A Man” on future tours, but it’s still a piece of the fabric that is Def Leppard and an integral part of the Adrenalize album.