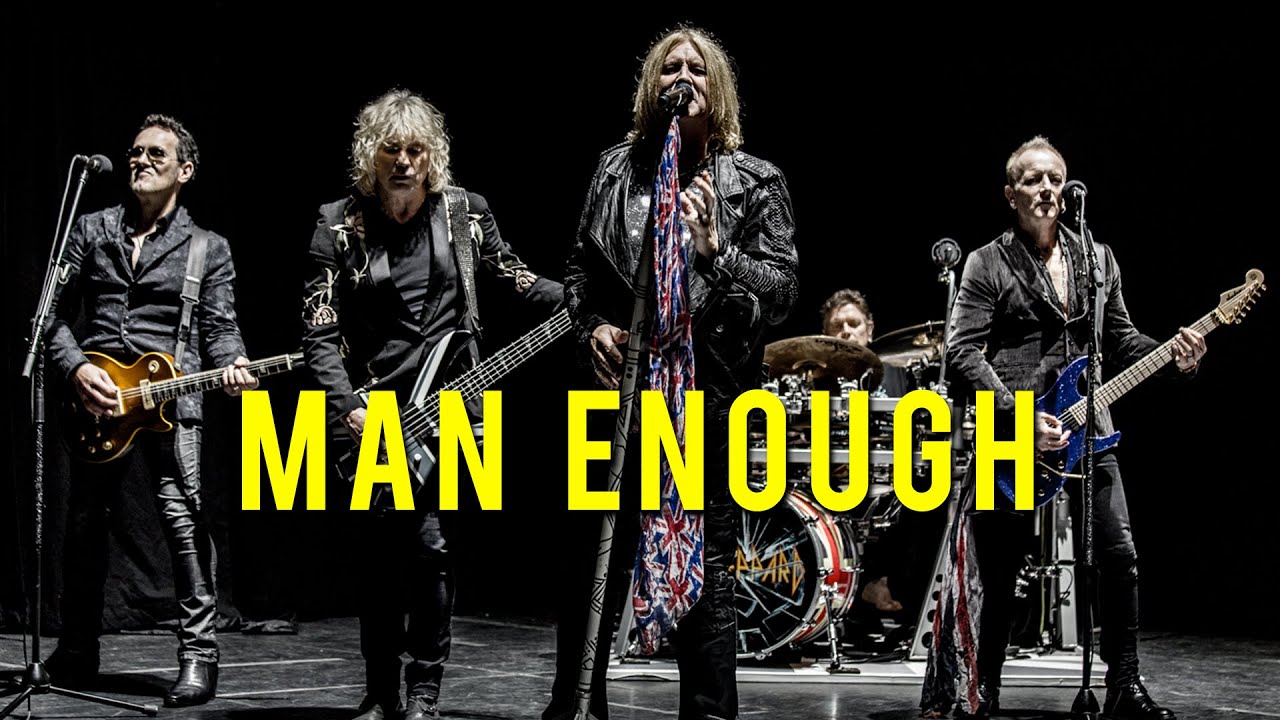 The song was the third single off of the band’s self-titled Def Leppard album.

“Man Enough” also made it onto the 2-CD deluxe version of The Story So Far: The Best of, one of Def Leppard’s greatest hits releases.

Originally titled, “Are You Man Enough To Be My Girl,” here’s Phil Collen describing the song’s origins:

“I had this bass riff floating around my head, and I wanted it to have a similar vibe to ‘Billie Jean’ by Michael Jackson – almost a disco vibe.”

It’s also nearly impossible to not be reminded of Queen’s “Another One Bites the Dust” when listening to the track.

“People have said it reminds them of ‘Another One Bites The Dust’ by Queen. It has this dancey appeal. Our song ‘All Night’ was a bit like that, and ‘Excitable’ on Hysteria. But I think this is the first time we’ve really made it work. It just fell into place, and I think that’s because we didn’t restrict ourselves.”

By no means is “Man Enough” a copycat of Queen’s classic song; it’s more of a homage to a band that had such a huge influence on Def Leppard.

Joe Elliott commented about this very topic to TheGuardian.com:

“It’s OK to sound like somebody else because your own identity will come through. Everybody sounds like someone else sometimes. Why did I pick up a guitar in the first place? Because I heard someone else playing it. And what was I gonna play? What they were playing, until I learned to write.”

Def Leppard’s “Man Enough” music video is rather straightforward in its approach, yet the creative direction taken is a bit of a misfire.

The music video features washed-out colors, very dim lighting, along with a science-fiction, anime storyline interspersed throughout, which, collectively, distracts and detracts from the video’s overall momentum.

Whether you’re a fan of the song or not, it’s not a stretch of the imagination to say that the song’s message is light-hearted and all in fun, capped off by its tongue-in-cheek “Are you man enough…to be my girl?” lyric.


That being said, going a darker route with the music video (figuratively and literally) unnecessarily prevents fans from joining in on what is supposed to be a good time.

You can view Def Leppard’s “Man Enough” music video here (along with every other official music video from the band).

“Man Enough” For Critics Too

The song “Man Enough” struck the right chord (no pun intended!) with most critics.

“‘Man Enough’ flirts precariously with a funk lite stylistic departure that could have just as easily blown up in the band’s face (its bass line bears a mild resemblance to the David Essex song ‘Rock On’, a tune the band has been covering in their live set the last few years) but the band succeed by avoiding the temptation to oversell it or lay it on too thick.”

“Def Leppard have never been shy about sharing their love for Queen, name-checking ‘Killer Queen’ in the lyrics for ‘Rocket’ and performing ‘Tie Your Mother Down’ and other classics at the Freddie Mercury Tribute Concert. Here they dive deep into ‘Another One Bites the Dust’ territory (by way of Chic), with an infectious song built primarily upon Rick Savage’s massive, dance-floor friendly bass line.”

It is refreshing to see critics be in on the joke this time around, appreciating the song’s lyrical humor simply for what it is, as opposed to misconstruing the band’s tongue-in-cheek intentions as has been the case with past songs like “Let’s Get Rocked.”

MUST READ  Def Leppard: Promises (Song Spotlight): A Look Back

As mentioned in previous articles, the music industry days of having an effective, impactful single release strategy are long gone, since singles, per se, and chart performance no longer have much meaning anymore.

That aside, releasing “Man Enough” as single #3 — ahead of a powerhouse track like “We Belong” or in place of a straight up, hook-filled rocker like “All Time High” — might have slowed the Def Leppard album’s momentum.

Should “Man Enough” have been the follow-up to “Let’s Go” and “Dangerous“? It’s a valid question, but also a moot one.

Was it a wise choice to give “Man Enough” a break live in concert to allow for other songs to be inserted into Def Leppard’s setlist? Most certainly.

No doubt about it.