Def Leppard’s debut album On Through The Night was released on March 14, 1980. 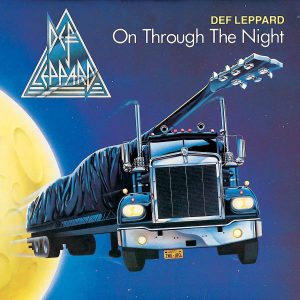 Def Leppard’s On Through The Night album remains a rather polarizing release.

Some very passionate fans consider it to be THE BEST album the band ever released, and all their subsequent albums — no matter how commercially successful — pale in comparison.

Other fans beg to differ, though. They feel it’s Def Leppard’s weakest release, a respectable effort showcasing the talents of an up-and-coming band, but one that required a couple more albums to master their craft (with the help of Mutt Lange) to reach their true potential. 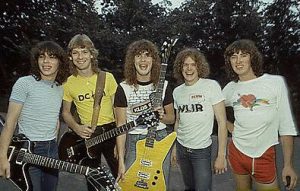 Here’s how Joe Elliott described the album in an interview with AVClub.com:

“You know, a lot of people got a great affection for that record, but as I always say, ‘Yeah, but it’s hardly the first Van Halen or Boston album, is it?’

“The one good thing about it was it gave us a launchpad to get better from. And I believe that when we got to High ’n’ Dry and on to Pyromania and Hysteria, we started doing the record the first album should have been. We couldn’t get Mutt [Lange] to do the first album, he wasn’t available. It was fun working with Tom [Allom, producer], but we spent most of the time drinking wine and having a good time as opposed to making a good record. I didn’t really always enjoy making albums with Mutt, but I certainly enjoyed listening to them afterwards. But it’s the other way around with On Through The Night.

“It’s a bit naive and it could have been a better record.”

Love it or hate it, the album is still a part of the fabric that ultimately made Def Leppard the band it is today. In addition, it’s one of only four albums guitarist Steve Clark performed on as a member of the band.

MUST READ  Def Leppard: Make Love Like A Man (Song Spotlight): A Look Back

And even though On Through The Night isn’t among the band’s biggest selling albums like Pyromania or Hysteria, and it “only” sold one million units (very respectable for a debut album), it still left a mark that many fans still look back on fondly to this day.

Fittingly, the album’s 40th anniversary will be celebrated as part of the band’s new box set release The Early Years, which also includes a remastered version of the High ‘n’ Dry album, and numerous other extras: B-sides, rarities and re-mix versions, Radio One sessions, Live from Reading, and the first-ever appearance of an unreleased and newly mixed show from Oxford in 1980. (You can read more about the release and order it here.)

On Through The Night: A Rock Brigade

Regardless of your preference, On Through The Night did include some genuinely solid hard rock tracks.

Fans of Def Leppard’s early music era are still treated to “Wasted” (and its unmistakable riff) on tour once in a while, and songs like “Rock Brigade” and “It Don’t Matter” still pack a wallop.

Looking back, Joe Elliott considers “Wasted” to be the album’s standout track:

You can read the Def Leppard Report’s detailed ranking for ALL of On Through The Night‘s songs here.

And who can forget “Hello America,” a song which conveniently served the purpose of introducing the band (and their brand of “New Wave of Heavy Metal” music) to American audiences?

Joe Elliott harkened back to the origins of “Hello America” to Rolling Stone:

“We had never even been to America at that point. I was working in a factory with lots of nuts and bolts and no natural light. But there was a lot of downtime, and I would sit around writing stuff. With this one, I had seen a TV show the night before — Kojak or Starsky & Hutch, something where they show the tree-lined boulevards of L.A. You see all these palm trees and you go, “Wow, this is a lot sexier than Sheffield!” That’s where that lyric came from — “Well I’m takin’ me a trip/I’m going down to Californ-i-a.” It was, “Get me out of here!”

Well, those daydreams and aspirations produced a Rock and Roll Hall of Fame band that is still going strong over four decades later.