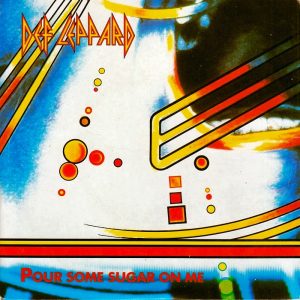 The iconic song was the fourth U.S. single off of the band’s Hysteria album.

“Pour Some Sugar On Me” is also included on the band’s Vault, Rock of Ages: The Definitive Collection, and The Story So Far: The Best of releases — basically, all of Def Leppard’s greatest hits albums.

“Pour Some Sugar On Me” Music Video: Take Two

Def Leppard’s “Pour Some Sugar On Me” music video played a vital role in the song’s epic success, but it required two attempts to get it right. 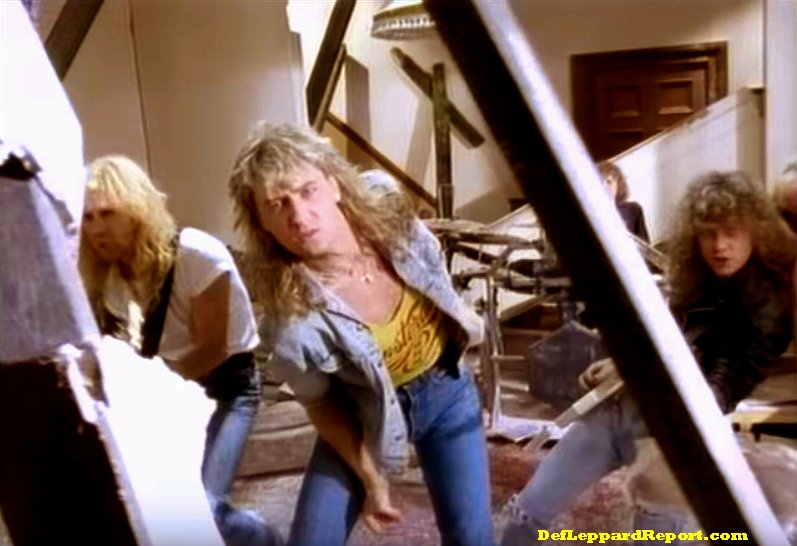 It was light-hearted and brought to mind the band’s memorable “Me & My Wine” video, perhaps as its pseudo-sequel: that same rowdy bunch of guys refuse to move out, even as their building is being demolished!

But was this music video and its nearly claustrophobic setting effective in capturing a song the magnitude of “Pour Some Sugar On Me”?

The new version (aka “the U.S. version”) undoubtedly improved on the “demolition” video, just as the band had hoped.

For starters, it featured a much more dynamic opening — the impactful “Love is like a bomb, bomb, bomb…” extended intro instead of the more banal “Step inside, Walk this Way, You and me, babe. Hey! Hey!” from the song’s album version.

The concert version also added a whole new level of pulse-quickening energy to the song, effectively capturing the anticipation and excitement of Def Leppard’s Hysteria in-the-round show: beginning with shots of the tour’s massive lighting rigs and a draped off stage (not to mention Rick Savage playing to the camera, amusing viewers)…

Subtle enhancements were also made to the video’s audio track, which made a huge difference: adding in the sound of an ever-present, concert audience buzzing throughout the song; sweetening the song’s shout-out-loud choruses with a minor echo to further get across a packed arena atmosphere.

The band took care of the rest, as director Wayne Isham expertly showcased their rousing performance throughout — from Phil Collen and Steve Clark playing the song’s monster riffs as only they can… 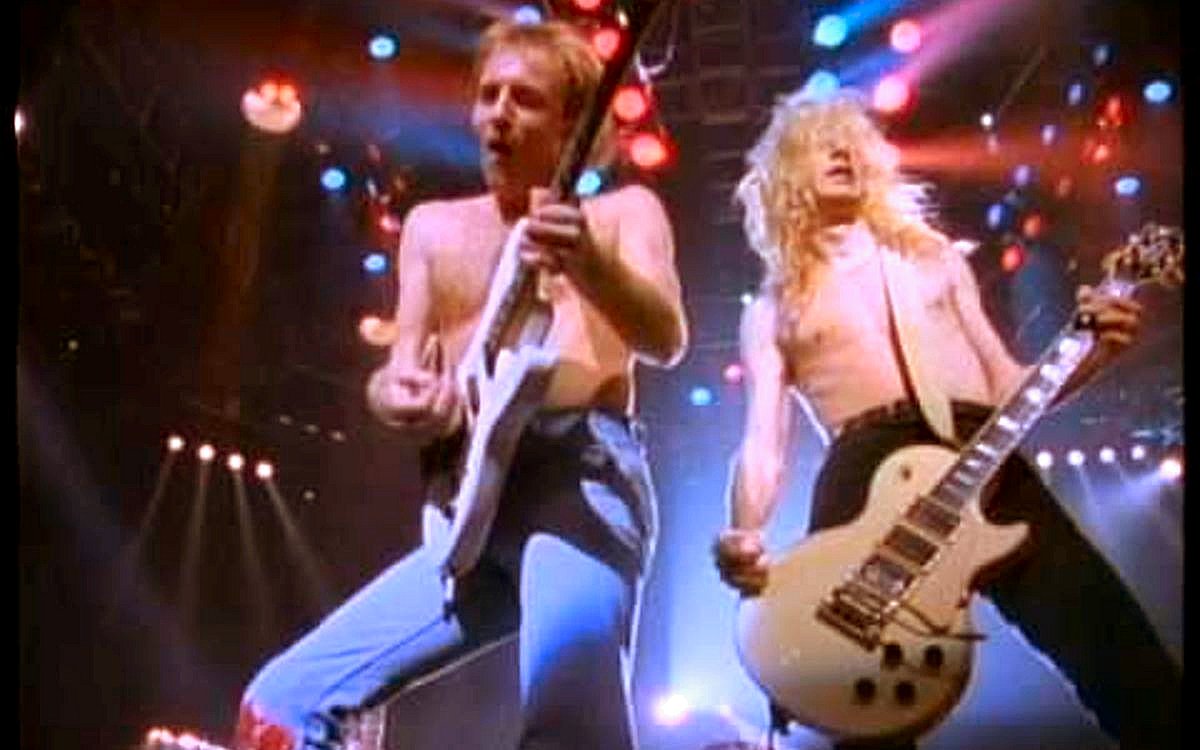 …to Rick Allen living up to his “Thunder God” persona…

…to Joe Elliott and his iconic outfit of shredded jeans and a cut-up “Women of Doom” shirt. 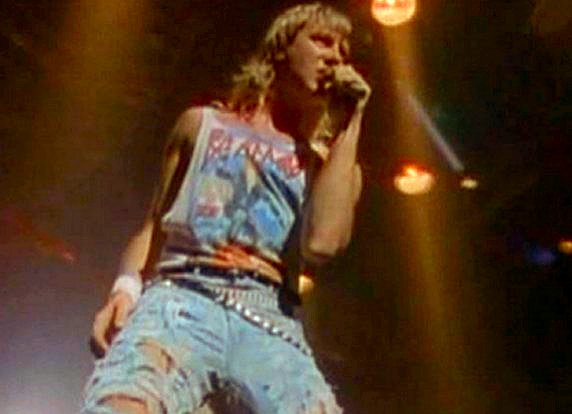 The band knew they captured lightning in a bottle, as did their record company. After getting video promo copies out to television networks for airplay consideration, it was just a matter of time. 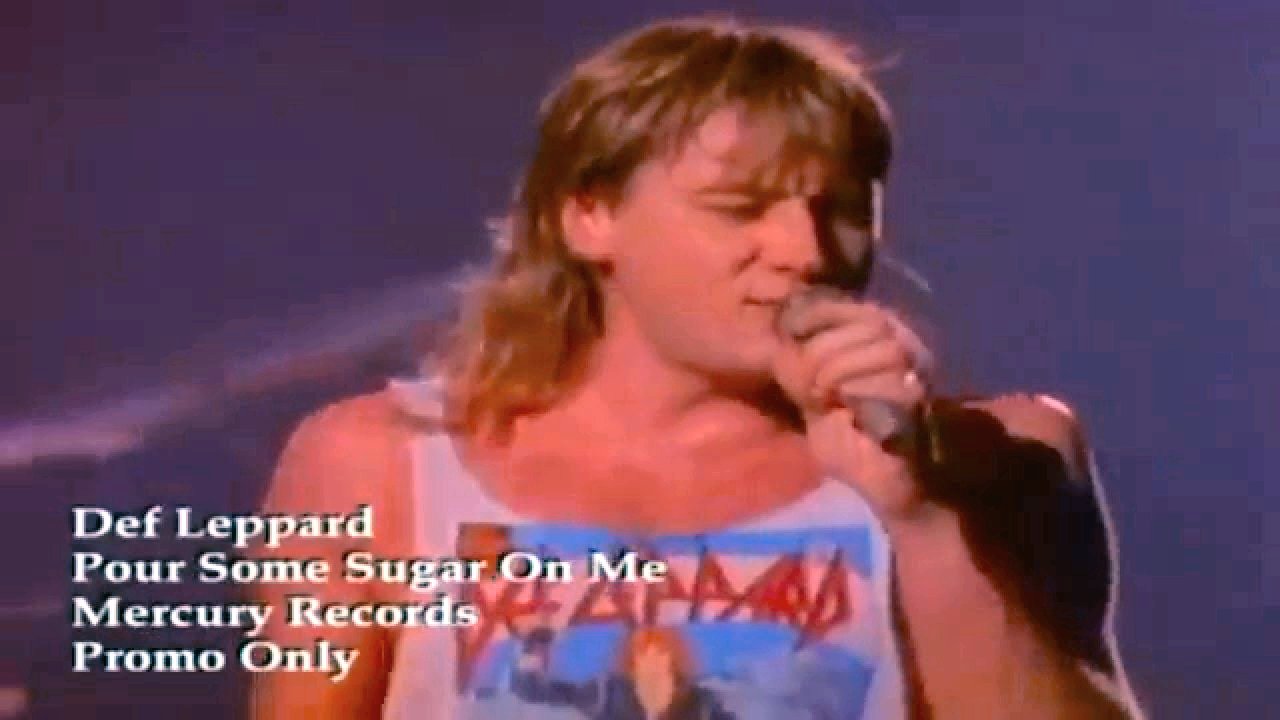 “Pour Some Sugar On Me” ended up earning the top video spot on MTV’s show “Dial MTV” for several months in a row; it also landed at the top (or near the top, depending on when the network would update its rankings) of MTV’s “Greatest Music Videos of All-Time” list.

Back in the late ’80s, Joe Elliott once humbly — yet proudly — commented about the U.S. version of the “Pour Some Sugar On Me” video in an interview by simply saying, “It’s good, isn’t it?”

“Good” doesn’t describe it. “Momentous” would have been a better term, as it was a major factor in elevating the song’s awareness and taking Def Leppard’s popularity to stratospheric heights.

You can view Def Leppard’s “Pour Some Sugar On Me” music video — U.S. and UK versions — here (along with every other official music video from the band).

Pour Some Sugar On Me? What A Great Idea…

As documented numerous times in the past, “Pour Some Sugar On Me” originated from Joe Elliott simply messing around on an acoustic guitar during a break in the recording studio while wrapping up the Hysteria album.

Fortunately, Joe’s idea caught the ear of producer Mutt Lange who immediately felt a gem of a song could be constructed from it.

The rest is history, but here’s Joe discussing the song’s origins:

“Pour Some Sugar On Me” successfully combines metaphors and sexual innuendos with vague, non-sensical lyrics that sound great phonetically…but don’t necessarily have any meaning.

The song’s unforgettable opening line? Joe Elliott explained how it came about on the Hysteria episode of the “Classic Albums” documentary series:

“Myself and Mutt Lange had dictaphones and we actually just went to opposite ends of the control room while it was playing and just made noises over the backing track and swapped machines and started translating what we thought the words were, and the first line on Mutt’s tapes, to me, sounded like ‘Love is like a bomb’…and that set the whole tone for the lyric.”

That’s not to say that some of Joe’s childhood musical influences didn’t make it into the song — after all, “Sugar Sugar” by The Archies (the first record Joe ever bought) does include the line “Pour a little sugar on me, baby…”!

Do You Take Sugar…Mutt Lange?

By the way, have you ever heard the unofficial demo (supposedly from the early Hysteria recording sessions) of “Pour Some Sugar On Me”?

It’s been on the internet for years and allegedly features producer Mutt Lange on lead vocals (using rough, temporary lyrics) to lay out the track’s foundation.

It’s amusing and makes you appreciate the song’s end result all the more.

Topping The Charts Isn’t Everything

“Love Bites” may officially be considered Def Leppard’s “biggest” hit because it reached #1 on Billboard‘s Top 100 Singles chart, but “Pour Some Sugar On Me” is arguably the Hysteria track that had the biggest impact.

It was “Pour Some Sugar On Me” that caught everyone’s attention: radio stations and MTV fell in love with it and kept it in unlimited heavy rotation. As a result, record stores could barely keep Hysteria in stock, as several millions of copies were sold over the course of the single’s release.

That’s how powerful “Pour Some Sugar On Me” was.

It gave Def Leppard the opportunity to reclaim the spotlight and not only revisit, but surpass, the immense success they previously enjoyed with Pyromania.

“Pour Some Sugar On Me” also perfectly positioned follow-up single “Love Bites” to reach a mass audience, resulting in the band’s first #1 hit and adding even more momentum to the Hysteria album and tour.

Unlike “Love Bites,” “Pour Some Sugar On Me” topped the Billboard charts at #2, but remains one of Def Leppard’s go-to hits: it’s hard to ever imagine a Def Leppard concert without “Sugar” in the setlist.

“Pour Some Sugar On Me” was not only one of the biggest songs of the late-’80s (if not the decade), it remains one of the band’s biggest — and most important — songs.

The song took on a life of its own, and, for better or worse, is the song many people will always associate with the band.

It’s not surprising Joe Elliott was asked during an interview with Good Morning America — decades after its release — to literally pour some sugar into a mug for the interviewer’s amusement.

It’s also no surprise Joe filmed a humorous, slightly bizarre video based around the classic song’s theme — pouring sugar onto items…and seeing the magic that ensues! Fans ate it up. (Pun intended!)

Def Leppard has performed “Pour Some Sugar On Me” in concert literally thousands of times. They know it’s wanted and expected from (the majority of) live audiences — and that in itself is why they’ll never get tired of playing it.

“Pour Some Sugar On Me” continues to electrify in concert; it’s an event in itself to hear it performed and sing along to, and will always be one of the high points of a Def Leppard show.

DefLeppardReport.com ranks “Pour Some Sugar On Me” the #3 track off the Hysteria album, describing it as:

“A bombastic, rock powerhouse. It’s a monster of a song — as in monster drums, monster guitars and monster hooks — all complementing its gruff, rap-infused, sing-along vocals. Blend them all together and you have an outstanding result.”

To this day, many fans still crave their “Sugar” fix, and always will. In the name of love…and Def Leppard!