Def Leppard’s unique and underrated Slang album was released on May 14, 1996. 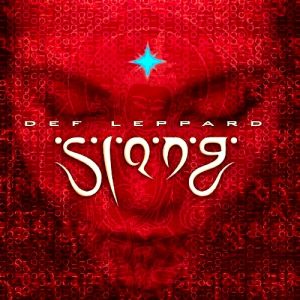 Aside from On Through The Night, Slang is Def Leppard’s other most polarizing album.

Upon its release, it was difficult for some longtime fans to grasp that Slang didn’t sound at all like Def Leppard’s previous releases.

Where were the anthemic, arena-rocking, chorus-chanting, “sugar”-for-the-ears songs? And — gasp! — there wasn’t even a power-ballad!

Is that even possible when it comes to a Def Leppard album?!?

Well, with the arrival of Slang, it was.

Grunge was prominent around this time, and for many radio stations and “previous” Def Leppard fans (as odd as that may sound), it all of a sudden became cool not to like the band’s music, even make fun of it…

Do You Wanna Get… Slanged?

Def Leppard was in a no-win situation: if they were to release an album of songs even resembling something like “Pour Some Sugar On Me,” many would say the band was stuck in the ’80s and out of touch.  If they were to go in a grunge direction, they’d be accused of being inauthentic and copying the bands who stole their spotlight.

But this didn’t happen overnight.

When Adrenalize was released in 1992, many radio stations that used to play Def Leppard’s music were starting to switch formats, and the grunge groundswell was bubbling up fast. (Fortunately, Adrenalize was still able to break through due to a very strong start out of the box; the album’s massive tour definitely helped support the release, too.)

But peoples’ musical tastes were literally changing before your eyes during the Adrenalize years. One prime example was Def Leppard’s performance at the 1992 MTV Music Video Awards, which began to expose an ever-growing disconnect between the band’s music and MTV’s (new) audience.

Having the band on stage singing “Let’s Get Rocked” and shouting out lyrics about tidying your room just wasn’t working so well.

Joe Elliott appearing in biker shorts and wearing a dead mouse/skull t-shirt, capped off with a beret and what looked to be a bathrobe didn’t seem to help either, as witnessed in the rather muted, mostly oft-put crowd response…

Slang With Me…Or Not

By the time of Slang‘s release in 1996, the transformation to grunge music ruling the airwaves and charts was in full effect.

Large segments of the Def Leppard’s “casual” fans from the late ’80s, especially during Hysteria‘s heyday, had completely lost interest in the band.

They now preferred groups like Nirvana, Soundgarden, and Alice in Chains.

That was the pop culture landscape Def Leppard was up against.

Not only that, it was a challenging time for band members on a personal level, as hardships and life changes inevitably had to be dealt with: Rick Savage had been diagnosed with Bell’s Palsy disease between the Adrenalize and Slang releases; his father had also passed away. Joe Elliott, Rick Allen, and Phil Collen also had their share of marital/personal issues.

It was a trying time, to put it mildly.

For better or worse, Joe Elliott would end up describing Slang as the album that brought “life into the equation.”

Promoting the Slang album was a whole other predicament.

Again, by this time, many radio stations no longer had any interest in playing (aka supporting) anything resembling Def Leppard’s brand of music.

And as for those radio stations that still played “rock,” well, Def Leppard wasn’t the type of rock their alternative music-leaning listeners wanted to hear.

The situation was all the more challenging when the band’s record company didn’t have immediate radio-friendly hit singles to choose from to launch the album — there was no sequel to”Pour Some Sugar On Me,” not even tongue-in-cheek sing-alongs like “Armageddon It,” “Let’s Get Rocked,” or even “Make Love Like A Man.”

Furthermore, Slang featured a stripped-down production; it wasn’t recorded in a typical recording studio but a private house in Marbella, Spain. Rick Allen used an acoustic drum kit; Mutt Lange didn’t have any production (or songwriting) involvement either.

But this was all done intentionally.

But it was the right approach.

Joe Elliott described their Slang thought process like this:

“We couldn’t just go out there and make an album sounding like Nirvana. That’d be ridiculous. That would have been like cashing in, bandwagon-style. But what we did do is just strip back a lot of the harmony stuff and just made a much more lyrically honest record.”

Similar to Songs from the Sparkle Lounge, most of Slang‘s songs were written by one or two band members.

Surprisingly, “Work It Out” was chosen as the album’s first single (in prior years, it would have likely been considered more of an album cut).

The song was solely written by Vivian Campbell, not the usual Joe, Sav, Phil (and Mutt Lange) collaboration.

Vivian’s original version of “Work It Out” was “Leppard-ized” to an extent, but still had a different sound and vibe than what Def Leppard fans were accustomed to.

As you can read in The Def Leppard Report‘s Slang album song ranking, the promotional strategy for “Work It Out” was unconventional: the song was played for radio station program directors WITHOUT telling them who the band was — just to let the music (and Joe Elliott’s fairly unrecognizable Iggy Pop-like vocals) speak for itself.

Ultimately, some radio stations were pleasantly surprised and did end up supporting the “Work It Out” single, but it didn’t result in the typical heavy rotation the band often enjoyed in years past.

For the most part, the band’s music videos for Slang also had a more somber tone: “Work It Out” had a serious look and feel, while “All I Want Is Everything” was in the vein of the band’s dark “Tonight” music video (inter-cutting shots of the band with a moody storyline). 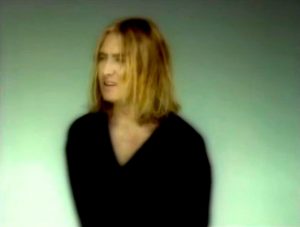 Only the song “Slang” had a more playful, almost kinetic, music video…but that was mostly enjoyed by international audiences and rarely seen in the U.S. (You can view all the band’s videos in the Music Video section.)

The “usual” press outlets that normally would have promoted the heck out of a new Def Leppard album just weren’t as willing anymore.

MTV was no longer a viable, promotional outlet either —  Slang got a fraction of the coverage the band would have normally received for a new album release.

Def Leppard did appear on “The Tonight Show with Jay Leno” to perform “Work It Out” — surprisingly, the band’s first appearance on the show — but promotional opportunities were still far and few.

That’s not to say there wasn’t a lot of interest and coverage elsewhere around the world.

There were some great, interesting interviews with the band that effectively promoted Slang… 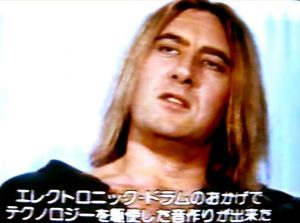 …but as you can see from the picture (and subtitles) above, just not in the U.S.

There was a fantastic program featuring the band discussing Slang, answering fan questions, showing tour rehearsal footage, in addition to multiple interview segments — and I do mean MULTIPLE. 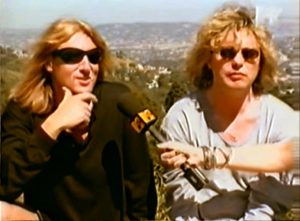 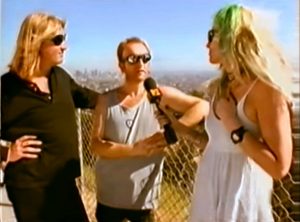 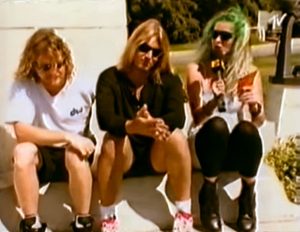 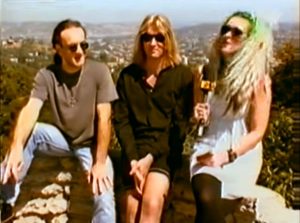 …and even the entire band together… 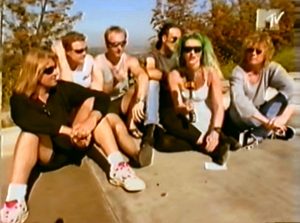 …along with Slang tour rehearsal footage: 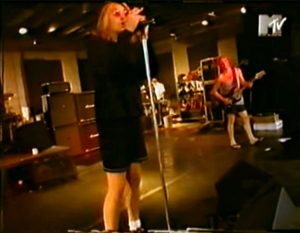 This excellent promotional opportunity aired on MTV…in Europe, not the U.S.

In case you’re ever interested in watching the MTV Europe Slang special (and have the time), here you go:

It should come as no surprise that Slang was not a #1 album for Def Leppard, like Hysteria and Adrenalize before it.

But the fact that Def Leppard was still able to achieve a Top 15 album debut during the mid-’90s — with so much less radio and press willing to support it — is quite an accomplishment.

Ultimately, Slang ended up being certified gold (sold over 500,000 units).

Def Leppard also released a Slang deluxe edition in 2014 and loaded it up with bonus tracks — demos, alternate versions, and more. The reissue provided the band with a great opportunity to once again spotlight and reflect on a release that just never seemed to find its audience or get its due.

It’s a shame many casual fans abandoned Def Leppard’s music around the time of Slang, or simply didn’t give the album a fair chance.

They missed out on some excellent compositions showcasing some of the band’s most raw, mature work.

The album included some incredible songs which, unfortunately, still remain rarities when it comes to a Def Leppard concert setlist: “All I Want Is Everything” featured some of Joe Elliott’s best songwriting and vocals; the same can be said for “Where Does Love Go When It Dies” and “Blood Runs Cold” (which Joe co-wrote with Phil Collen).

Other standout tracks that still hold their own include “Turn to Dust” and “Pearl of Euphoria.”

Whether or not Slang‘s songs “sound” like Def Leppard is beside the point. Most tracks are very solid and easily stand on their own.

Decades after its release, Slang could feasibly be interpreted as a concept album — not only representing the challenging music climate of the mid-90s, but also as Def Leppard’s musical manifesto to the industry and fans who had dismissed them and moved on…but that’s a story for another time!

In the meantime, you can read The Def Leppard Report‘s review and ranking for all of Slang‘s songs here.

Here’s how Joe Elliott poignantly summed up the response to Slang:

You might find it amusing to know that glam rock legend Ian Hunter confirmed to The Def Leppard Report that Slang is his favorite Def Leppard album: 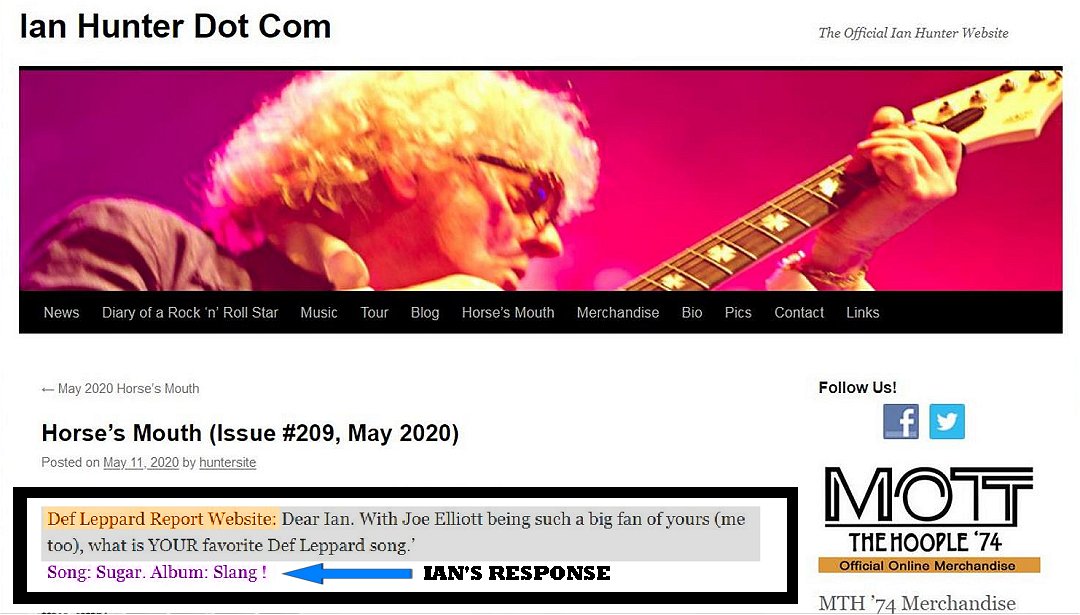 So which one is it: Best? Worst?

That’s up to you.

But in the end, Def Leppard’s Slang was the right album at the right time.