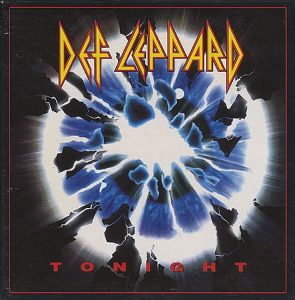 The song was the fifth single off of the band’s multi-platinum Adrenalize album.

“Movin’ To The Rhythm Of Your Heartbeat…”

The song is a standout among some Def Leppard fans, seduced by its moody, temptatious lyrics…yet, for others, “Tonight” is one of the least favorite ballads from the band’s repertoire.

“Tonight” peaked at #62 on Billboard’s Top 100 chart — after only 5 weeks into its run — which wasn’t typical for a Def Leppard single during that time.

In comparison, Adrenalize‘s other ballad “Have You Ever Needed Someone So Bad” peaked at #12 on the Billboard Hot 100 chart.

As for Def Leppard’s “Greatest Hits” releases, “Tonight” is not included on Vault or even Rock of Ages: The Definitive Collection; it wasn’t until The Story So Far greatest hits release that it finally made the cut — and that was only on the deluxe edition.

The “Tonight” music video is dark — figuratively and literally.

Filmed in black and white, the video features quick cuts of the band with their faces mostly washed out.

It’s a shame because the video could have enhanced the song — leaving a lasting visual impression — instead of detracting from it.

Think of the “Pour Some Sugar On Me” music video and how its live, sold-out arena atmosphere adds a whole new layer of energy to the song, or the unforgettable “Photograph” music video featuring a Marilyn Monroe look-a-like. (Sadly, Kay Kent — a professional Marilyn Monroe impersonator who played the part of the actress in the video — committed suicide in 1989.)

Those videos still leave a lasting impression even decades later.

The music video for “Tonight” seems more (and too) focused on telling a brooding nighttime tale…in a very dark forest. And it leaves fans wanting more. A lot more.

Commercially, not so much.

It’s important to remember this all happened during a time of change: the band’s chemistry had changed with Steve Clark’s passing, and the music industry as a whole had set its sights on grunge.

After all, “Tonight” was Adrenalize‘s FIFTH U.S. single; the band and record company might have been trying to change things up.

As admitted by the band, there are a lot of mixed feelings about Adrenalize and, arguably, its overproduced songs.

I’m reminded of this candid quote by Rick Savage about the album:

“We ended up making a record by the numbers…We tried to outdo ‘Hysteria,’ which was a mistake…It doesn’t really cut it for me.”

And Joe Elliott had this to say:

“My opinion of the album changes depending on which way the wind’s blowing. I mean, sometimes I really don’t like it, and then there’s other times I think ‘No, that’s our glam rock album, we made a really cool record.'”

Def Leppard played “Tonight” during their Adrenalize tour, but haven’t since, which is telling.

And even though the band performed “deeper tracks” during their Las Vegas Planet Hollywood “Sin City” residency, “Tonight” was never included. (Take an in-depth look at their setlist…and what they can do to shake it up going forward here.)

DefLeppardReport.com ranks “Tonight” the #10 track off the Adrenalize album. (Read much more about “Tonight” and all of the album’s ranked songs here.)

As for whether “Tonight” is one of Def Leppard’s most — or least — potent power ballads?

To borrow from the song’s lyrics, “If it pleases you…,” well, then that’s all that matters!