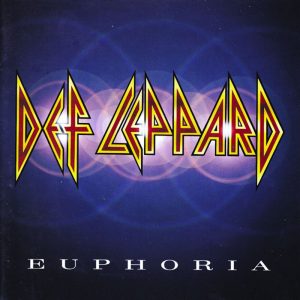 The More Things Change, The More They Stay The Same

By 1999, the grunge movement which tormented Def Leppard’s brand of music had mostly come and gone.

Feel-good pop songs were not only returning to radio stations, they were welcomed and no longer frowned upon by mainstream audiences.

So what better way for Def Leppard to make the most of this friendlier music environment than release an album like Euphoria!

Let’s take an in-depth look back at the album…

‘Back In Your Face’ Like They’ve Never Been Away

Euphoria was definitely a return to form for Def Leppard.

It featured the band’s trademark hooks, vintage harmonies, signature polished production, and even resumed the tradition of one-word Def Leppard album titles ending in “ia,” just like Pyromania and Hysteria.

It was yet another example to reinforce the message Def Leppard was trying to get across: We’re back!

Euphoria had all the makings of a big, commercially-successful Def Leppard album.

Even without Mutt Lange to lead the album production (Pete Woodroffe produced it), Mutt did co-write a few of the album’s songs: “Promises,” “It’s Only Love” and “All Night.”

“Promises” — the album’s standout track — was an excellent, radio-ready single that helped reintroduce Def Leppard and the band’s classic sound to fans.

The track was initially promoted as a pseudo-follow-up to the band’s iconic song “Photograph,” which wasn’t quite fair. Sure, maybe it was in the spirit of Def Leppard’s 1983 classic, but “Photograph” it was not. (A more fair comparison to “Promises” would be the band’s more recent track “Dangerous.”)

“Promises” accomplished its mission as Euphoria‘s lead-off single, hitting all the right notes — figuratively and literally — and re-establishing the band’s presence on radio.

The track ultimately reached #1 on Billboard‘s Mainstream Rock chart — a barometer better suited for Def Leppard’s music at that time, instead of the typical Hot 100 Singles chart whose top 10 songs that same week included artists such as Jennifer Lopez, TLC, Ricky Martin, Backstreet Boys…and, of course, still being the late ’90s, Pearl Jam.

It’s unfortunate many of Euphoria‘s strongest tracks were never promoted to radio stations, which could have provided a much larger audience — aka fans the band lost touch with during the Slang years — the opportunity to rediscover a more vintage Def Leppard.

Euphoria “rocked,” as Joe Elliott describes in this video:

“Promises” kicked things off splendidly, but Euphoria‘s promotional push quickly dwindled after the single had its run. Consequently, several other rock tracks worthy of attention were never given a fair chance (i.e. promoted to U.S. radio stations).

“Demolition Man” is an excellent rocker (not to mention an effective opening track). Its fast pace and Ballroom Blitz-type chorus could have connected well with rock radio audiences…but it wasn’t given a chance.

“Back In Your Face” is in the spirit of arena rocker “Rock and Roll Part II” and does a wonderful job showcasing an attitude from the band harkening back to their Pyromania days…but it wasn’t given a chance.

“21st Century Sha La La La Girl” lives up to its “galactic sugar high” lyric with the frenetic energy it invokes, and its rap-like verses are reminiscent of “Pour Some Sugar on Me” albeit with a more refreshed, late-’90s Def Leppard vibe…but it wasn’t given a legitimate chance.

These rockers best represent Euphoria‘s commercial appeal and could have effectively been utilized to add more oomph to the album’s overall promotional push.

They could have complemented other Euphoria tracks that targeted AOR (album-oriented rock) radio stations: “Paper Son” (which was promoted to AOR stations) made perfect sense, fitting right in with previous band epics like “Gods of War” and “White Lightning.” “Kings of Oblivion” (which was not promoted to AOR stations) conjured up an earlier Def Leppard era and should have been given a chance to reach listeners who would have likely embraced it had they heard it.

The point isn’t that any and all tracks should have been given a promotional push — that’s not realistic. In all fairness, other Euphoria tracks like “All Night,” “Guilty” and “Day After Day” are best suited as deep cuts. As enjoyable as they may be for some fans, they lack the evergreen endurance of so many other Def Leppard classics.

The point is a longer-term, more strategic, cohesive approach might have given Euphoria a much better — and longer — opportunity to shine.

The band did its part touring well over a year (over 150 dates!) to support the album. As for how long Euphoria lasted on the album charts? Only 16 weeks.

Euphoria doesn’t include a “signature” power-ballad.

While some may feel “Goodbye” fits the bill, its unique song structure and atypical chorus makes it more of an outlier than the type of Def Leppard power-ballad some fans would expect.

Surprisingly, “Goodbye” was chosen as the album’s second U.S. single. It was released four long months after “Promises” and (unsurprisingly) failed to chart.

“To Be Alive” — another unique Euphoria ballad — is a wonderful, yet underrated, song that deserved more attention. And even though it wasn’t a single, it’s arguably more memorable and looked back on more fondly than “Goodbye.”

On a side note, ballad “It’s Only Love” works just fine as an adult-contemporary album track. In hindsight, it foreshadowed the lighter pop sound the band would pursue in future album endeavors X and Songs from the Sparkle Lounge.

If you would like to read more about Euphoria‘s individual tracks (rankings and reviews), check out the Def Leppard Report‘s song ranking article here.

MUST READ  Def Leppard Self-Titled Album Anniversary: A Look Back

Euphoria debuted at #11 on Billboard‘s Top Albums chart and ended up being certified gold, on par with Slang‘s album sales.

It’s a far cry from the multi-platinum days of Pyromania, Hysteria, and Adrenalize, but still a respectable end result for a late-’90s Def Leppard album with a limited promotional push.

Decades after its release, fondness for Euphoria has mostly grown among fans, as it’s recognized for what it is: an album filled with some great, rockin’ Def Leppard tunes!

Many also consider Euphoria a farewell to Def Leppard’s era of big productions and glam-inspired original album releases — all the more reason it was given a second life for fans to reflect on (especially those who may have missed it the first time around) when it was remastered and part of the band’s “Vol. 2” deluxe box set release in June 2019. (Euphoria was simultaneously offered on vinyl for the very first time.)

The Sequel To Hysteria…?

Not only was Euphoria the type of record most Def Leppard fans wanted in 1999, it was also the type of commercial-sounding album the band’s record company had hoped for — so much so that the record company’s marketing strategy actually positioned Euphoria as THE sequel to Pyromania and Hysteria.

Posters and other P.O.P. (point of purchase) materials that were created by the record company to promote Euphoria at retail stores literally said “After Pyromania and Hysteria comes…Euphoria.”

Here’s one of the posters (note the first line under the band’s logo): 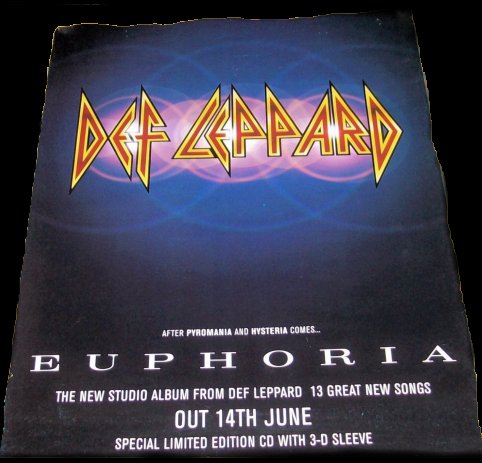 Bear in mind that since Pyromania and Hysteria, the band released original studio albums Adrenalize (1992) and Slang (1996).

But as a promotional strategy, it was decided that Euphoria would be the worthy successor to Def Leppard’s most successful, commercial-sounding albums. (The “ia” album title helped make the case easier.)

Whether that’s fair to Adrenalize (which far outsold Euphoria) is a whole other story.

As a marketing hook and with the goal of reintroducing (and branding) the band and album to the masses, it was understandable.

Here’s Joe Elliott and Phil Collen discussing Euphoria, as well as the record company’s reception to it:

After a short-term detour taken during the Slang release, Euphoria provided Def Leppard with the opportunity to come full circle and return to the signature sound that turned the band into a superstar act.

Could the album have reached a wider audience and been more successful with a more strategic promotional push? Arguably, yes.

Nevertheless, the message conveyed was still abundantly clear: Def Leppard was back!

Euphoria rewarded fans who made it through the dark days of grunge and longed for vintage Def Leppard…and it remains worthy of repeated listens to this day.